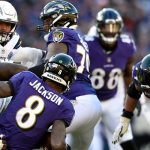 Two AFC division leaders square off on Sunday when the Los Angeles Chargers visit the Baltimore Ravens for a Week 6 battle. The kickoff for the game is scheduled for 1 pm ET at M&T Bank Stadium in Baltimore. The Chargers have won three straight, including a victory over the Cleveland Browns last weekend, 47-42. Ready for the best NFL betting action you will find online? At MyBookie you can review, compare and bet on the latest NFL odds, Game lines, spreads, totals, props and more. Creating winners every season we offer the most comprehensive selection of NFL futures and player props, No matter your knowledge or bankroll, we have your action covered with the latest NFL trends, picks and locks this season, we offer early lines for every NFL game in 2021.

NFL Today, Tune back in before Game Day Ya&#39all and we will brake down the Weekend's most interesting games, and don't forget to come back for early opening odds for next week on Sunday Night.

Two AFC division leaders square off on Sunday when the Los Angeles Chargers visit the Baltimore Ravens for a Week 6 battle. The kickoff for the game is scheduled for 1 pm ET at M&T Bank Stadium in Baltimore.

The Chargers have won three straight, including a victory over the Cleveland Browns last weekend, 47-42. Los Angeles is alone atop the AFC West standings with a 4-1 record, leading the Las Vegas Raiders and Denver Broncos by a game.

Baltimore has won four in a row after its come-from-behind overtime victory over Indianapolis on Monday night. The Ravens are also 4-1 and leading the AFC North by a game over the Browns and Cincinnati Bengals.

The Ravens are favored by 2.5 points in this contest, with the over/under set at 51.5 points. With all that in mind, let’s check out our NFL Betting preview for the upcoming match between the Chargers and the Ravens.

The Chargers have been beating some good teams on their way to the lead in the AFC West, defeating Kansas City on the road and edging out the Browns last weekend. Second-year quarterback Justin Herbert has been outstanding, drawing some attention for a possible MVP season.

Herbert has thrown for 1,576 yards and 13 touchdowns while tossing just three interceptions. Against Cleveland, he threw for 398 yards and four scores, leading the Chargers back from a 42-35 deficit with under five minutes to play in the game.

Herbert’s favorite receiver this season has been Mike Williams, and the two connected eight times for 165 yards and two touchdowns against the Browns. Williams has 31 catches for 471 yards and six scores this season, ranking in the top 10 in the league in all three categories.

Los Angeles is going to need to be stronger defensively against the potent Ravens running game. The Chargers are last in the NFL, allowing 157.6 rushing yards per game.

For much of the Monday night matchup with Indianapolis, Baltimore looked flat, unable to put many points on the board or get a consistent offensive attack. But down 25-9 midway through the fourth quarter, the Ravens rallied to force overtime with a pair of touchdown passes from Lamar Jackson to Mark Andrews, with the two hooking up for two-point conversions after each score as well.

In the extra session, Jackson threw his fourth touchdown pass of the game to win it for the Ravens. Jackson, known for his running ability, threw for 442 yards and four scores, completing 37-of-43 attempts through the air.

Jackson also led the Ravens in rushing yards with 62, and he’ll certainly be using that avenue to pick up yardage against the Chargers in this one. The Baltimore running game ranks fourth in the league at 148.8 yards per game, and the Ravens lead the NFL with 440.6 yards of total offense per game.

Defensively, Baltimore has struggled against the pass, giving up 296.4 yards through the air per game to rank 30th in the NFL. The Ravens will need to get pressure on Herbert to keep him from moving the Chargers up and down the field.

As we detailed, both teams have a lot of offensive firepower, and the strengths of the offenses are the weaknesses of the opposing defenses. Both quarterbacks are playing extremely well right now, so this one could come down to the supporting cast that is able to make more plays.

We like the Ravens to get the win at home, simply because they’re in their home venue. West coast teams traveling east for an early-starting game can sometimes have their troubles, but we think it will be Baltimore that gives Los Angeles most of its problems.

Take the Ravens to win and cover in this one.

We offer the latest Weekly NFL Game Odds, NFL Live Betting, This Weeks Football totals, spreads and lines. The latest team stats, NFL Futures, Props, Specials and more, including Vegas Odds the Super Bowl 55, Player Props & other betting info of interest on the National Football League. So what are you waiting for Signup and Bet on the NFL Today!

Posted: Friday, October 15, 2021 11:33, EDT
Two AFC division leaders square off on Sunday when the Los Angeles Chargers visit the Baltimore Ravens for a Week 6 battle. The kickoff for the game is scheduled for 1 pm ET at M&T Bank Stadium in Baltimore. The Chargers have won three straight, including a victory over the Cleveland Browns last weekend, 47-42. Los Angeles is alone atop Read More

Posted: Friday, October 15, 2021 10:14, EDT
Two teams with Super Bowl aspirations will meet on Sunday in the Dawg Pound, as the Cleveland Browns will host the Arizona Cardinals. The Cardinals are the NFL’s lone undefeated team, and heading into Cleveland will be their toughest challenge to date. The 3-2 Browns lost a heartbreaker last week to the Los Angeles Chargers in a high-scoring affair. The Read More

Posted: Friday, October 15, 2021 9:41, EDT
There will not be a matchup of future Hall of Fame quarterbacks in Pittsburgh on Sunday night as the Seattle Seahawks will be without Russell Wilson against Ben Roethlisberger and the Steelers, who are solid favorites because of it on the NFL odds. How to Bet Seahawks at Steelers NFL Odds & TV Info When: Sunday, 8:20 PM ET Where: Read More

Posted: Thursday, October 14, 2021 5:37, EDT
If NFL Week 5 proved anything, it’s that you never know until you know. What we mean by that is teams like the Kansas City Chiefs, Denver Broncos, and New England Patriots, hot preseason Super Bowl favorites, have underperformed while squads like the Dallas Cowboys and Arizona Cardinals have dominated. Because most of us are confused after the first five Read More

Posted: Thursday, October 14, 2021 5:08, EDT
One of the best rivalries in sports resumes on Sunday when the Green Bay Packers head to Soldier Field to take on the Chicago Bears. Will the Bears make it 3 in a row at home? Or will the Packers grab the straight-up and cover victory? Check out NFL odds, analysis, and a free pick for Packers versus Bears.  NFL Read More

Posted: Thursday, October 14, 2021 4:52, EDT
A couple of NFL squads with continued playoff aspirations hit the gridiron at Bank of America Stadium in Charlotte on Sunday. The Minnesota Vikings and the Carolina Panthers believe they’re playoff teams. The Panthers have more to prove after suffering their second straight loss in NFL Week 5. Will Carolina get back on the winning track? Or will the Vikings Read More

Posted: Thursday, October 14, 2021 4:11, EDT
The Kansas City Chiefs head to Landover to face the Washington Football Team in a must win game. KC has lost 3 games this season, which means the Chiefs have lost more games in five weeks than they did all of last season. Versus the WFT, most feel KC gets back to winning football games. But are those feelings accurate? Read More

Posted: Thursday, October 14, 2021 12:57, EDT
The Indianapolis Colts had every chance in the world to upset the Baltimore Ravens on Monday night. Missed field goals and an extraordinary night by Lamar Jackson did the Colts in, and they racked up another loss. The Houston Texans know how the Colts feel. Houston has had an abysmal season, losing four in a row and looking like one Read More
View Full NFL 2021 Archive