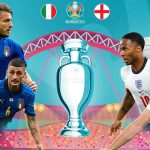 The EURO 2020 comes to its conclusion on Sunday when the English and Italians step onto the pitch in the tournament’s final. Both England and Italy have played fantastic. Both are hot heading to the championship match and both feel they can win the trophy. England is a slight favorite over Italy, but the Italians have dominated in the past couple of years. The European Nations Championship Cup (EURO Cup) is the second-biggest soccer competition that is held every four years since 1960. Which teams will make the quarters, semis, and finals? For these questions, MyBookie has the betting odds for each game of the EURO 2024.

The EURO 2020 comes to its conclusion on Sunday when the English and Italians step onto the pitch in the tournament’s final. Both England and Italy have played fantastic. Both are hot heading to the championship match and both feel they can win the trophy. England is a slight favorite over Italy, but the Italians have dominated in the past couple of years. Will the English finally notch their first major tournament win since 1966? Or will Italy show they’re back where they belong, atop Europe’s soccer mountain? Let’s try answer those questions for you so you can get all set to make your bets against their Euro Cup odds.

Why bet on England versus Italy?

England has won four straight in the tournament. It hasn’t been easy, but somehow, someway, the English pull through. Versus Denmark, England found themselves down 0-1. But they rallied to tie the match before Harry Kane kicked in a penalty shot in overtime to get the win. England is loaded at every level. If any team can end Italy’s run, it’s the English.

Why bet on Italy versus England

After mowing through Turkey, Switzerland, and Wales during group play, the Italians beat an Austrian squad with 21 European League players, the top-ranked Belgians boasting Kevin De Bruyne and Romelu Lukaku, and the incredibly talented Spanish. Italy has proven they can beat the best in the world already. Not only that, but Italy can play any style of soccer.

On paper, England looks like the better squad. Not only do the English start Harry Kane, Raheem Sterling, and Harry McGuire, three of the best players at their respective positions in the world, but the English are so deep they can bring a player of Phil Foden’s quality off the bench.

Foden, Kane, Sterling, and McGuire make England close to impossible to beat. However, the Italians have won 33 straight, a record. Italian fans would have reason to worry if Italy hadn’t won many of those matches in different ways.

Italy faced a tough customer in Spain, but the Italians pulled through via penalty kicks. In the match before, Italy beat Belgium by being aggressive. The Italians dominated Switzerland and Turkey during group play by playing the same way they did against Belgium.

In the 1-0 win against Wales, Italy played a more subdued style. Italy’s flexibility makes them the team to back on Sunday. England can be flexible as well, but the Italians can strike quickly, or take their time after grabbing possession.

It will be tough for England to deal with Immobile, Insigne, and Chiesa and then break down Italy’s defense led by Emerson, Bonucci, and Chielini. Once the English get a shot on goal, one of the top keepers in the world, AC Milan’s Gianluigi Donnarumma, will be there ready to prevent Kane and Sterling from kicking it into the back of the net.

England can win this match. But there’s something special about this group of Italian players. In the EURO 2020 Final, Italy should prevail.

Stay with us for the latest news, odds and betting guides for the 2024 Edition of the UEFA EURO Cup which will be the 17th edition of the tournament.

Posted: Friday, July 9, 2021 1:18, EDT
The EURO 2020 comes to its conclusion on Sunday when the English and Italians step onto the pitch in the tournament’s final. Both England and Italy have played fantastic. Both are hot heading to the championship match and both feel they can win the trophy. England is a slight favorite over Italy, but the Italians have dominated in the past Read More

Posted: Monday, July 5, 2021 2:21, EDT
Two of history’s great soccer powers battle on Tuesday in a EURO 2020 Semi-Final. Spain takes on Italy for the right to play for the EURO 2020 Championship. The Italians have dominated so far during the tournament. Spain got lucky in their last, but sometimes luck is all you need. Will the Italians continue their march to EURO 2020 greatness? Read More

Posted: Thursday, July 1, 2021 3:58, EDT
The UEFA European Championship is down to its final eight. Friday’s first quarterfinal matches pit scorching Spain against giant killer Switzerland. The second match is a battle between two of the highest-rated teams on the planet, top-ranked Belgium and seventh-ranked Italy. Will the Swiss once again upset a world power? Which team moves to the semifinals when the Azzuri and Read More

Posted: Tuesday, June 29, 2021 4:26, EDT
After Tuesday’s matches, we can officially claim EURO 2020 to be unpredictable. The pre-tournament favorite fell, causing an entire nation to gasp and cry in their wine. Also, a team that played less than stellar during the group stage came up with a second straight huge win. Let’s take a look at our Euro 2020 Betting Update so you can Read More

Posted: Monday, June 28, 2021 6:22, EDT
Over the weekend, the first four Round of 16 matches at EURO 2020 happened. A Sunday match produced a major surprise while a couple of favorites won on Saturday. Check out a run down of the EURO 2020 Round of 16 after the first four contests so you can continue betting against their Euro Cup odds.  UEFA Euro 2020 | Read More

UEFA Euro 2020 Betting Predictions: Who Will Win It All?

Posted: Thursday, June 24, 2021 4:52, EDT
On Saturday, EURO 2020 heads to the knockout stage. Favored UEFA European Championship teams didn’t disappoint. France, Italy, Germany, England, Spain, Belgium, Portugal, and the Netherlands all stamped tickets to the Round of 16. But the knockout stage is when things get tough. Which favorites offer overlay odds and which underdogs are worth a look to win EURO 2020? Check Read More