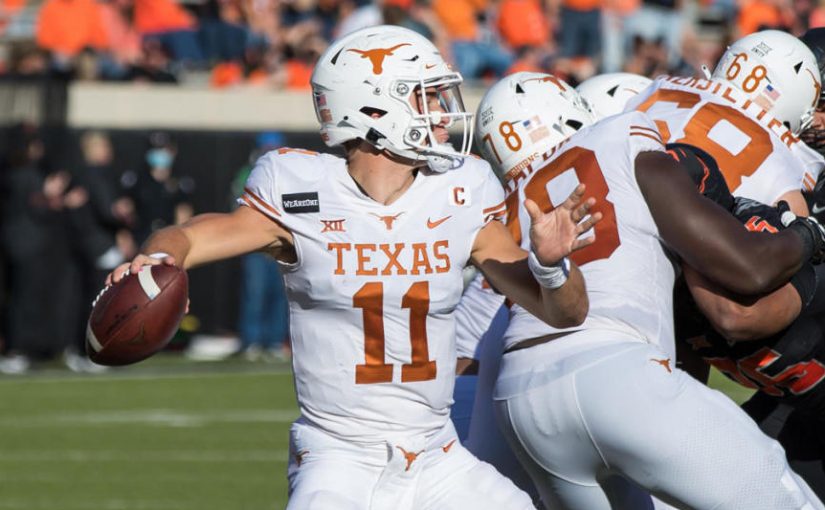 The game of the day from the Big 12 features surprising unbeaten and 12th ranked Oklahoma State as an NCAAF betting underdog at No. 25 and two-loss Texas on Saturday. If the Horns lose, they can forget about reaching the conference title game.

The Cowboys lost 41-34 in OT at home to Texas last season. OSU QB Spencer Sanders threw for a career-high 400 yards and four touchdowns, but committed three of the Cowboys’ four turnovers. Sam Ehlinger threw a 15-yard touchdown pass to Joshua Moore in overtime and Joseph Ossai sealed the victory by sacking Sanders. OSU outgained Texas 530 yards to 287, but the four turnovers were a killer. The Longhorns hold a 26-9 advantage in the series over the Cowboys, including a 15-6 mark in Austin. After Texas won 12-straight meetings from 1998-2009, the Cowboys have won seven of the last 11 contests.

Why Bet on Oklahoma State?

The No. 12 Cowboys (5-0) have been off since a 24-14 win over Baylor on Oct. 2. Jaylen Warren ran for 125 yards and two touchdowns, while Spencer Sanders passed for 182 yards and ran for 76, but he helped Baylor stay in the game by throwing three interceptions. Tay Martin caught seven passes for 108 yards for the Cowboys.

In the last three games, Warren has been central to OSU’s offensive gameplan, logging 95 carries (32 against Boise State, 27 against Kansas State and 36 against Baylor). Sanders is one of just nine FBS players averaging more than 195 passing yards and more than 45 rushing yards per game in 2021. He also ranks second in the Big 12 and No. 21 in the FBS with an average of 13.95 passing yards per completion.

The Oklahoma State defense forced Baylor to punt on each of its first eight drives. The Bears were 0-for-6 on third down in the first half and had only six rushing yards before halftime. The Cowboys limited Baylor to 99 yards of total offense in the first half. It marked the fourth straight game where OSU allowed less than 100 yards of offense in a half. OSU has held 14 of its past 16 Big 12 opponents under their season scoring average.

Oklahoma State was without a pair of notable players – defensive end Brock Martin and running back LD Brown were both out due to injury. Not clear on their status for this one yet. Okie State has won 75 consecutive games when holding its opponent to fewer than 20 points, dating back to Sept. 13, 2003  – the longest active stretch of time in the FBS and longest since at least 1980.

Why Bet on Texas?

The Horns (4-2) blew a 28-7 first-quarter lead last Saturday and lost 55-48 to No. 6 Oklahoma in the highest-scoring game of 117 meetings in a series that will soon move to the Southeastern Conference. The Longhorns, who had won three in a row since a loss to future SEC foe Arkansas in Week 2, had never lost when scoring at least 48 points. They gave up 662 total yards, and gained 516.

QB Casey Thompson completed 20-of-34 passes for 388 yards and five touchdowns. He established career-bests for passing yards, completions and attempts, while tying his career high for touchdown passes. Thompson passed for four touchdowns in the first half, the second time he has had four passing TDs in a half, last accomplished in the second half against Colorado in the 2020 Alamo Bowl.

Xavier Worthy had nine receptions for 261 yards and two touchdowns. His 261 receiving yards were the second-most by a Longhorn in program history and the most-ever for a freshman. His two touchdowns brought his season total to six, tied for second among freshman in UT history. Bijan Robinson rushed 20 times for 147 yards (6.8 ypc) and one touchdown. Over his last 10 games, Robinson has totaled 1,311 on 172 carries (7.6 ypc) with 12 touchdowns, while hauling in 19 receptions for 298 yards (15.7 ypc) and scoring four touchdowns.

Fellow starting receiver Jordan Whittington was hurt in the fourth quarter of the Red River Showdown and will not play for a while. Junior Marcus Washington is slated to get the start in place of Whittington, while Kelvontay Dixon and Al’Vonte Woodard are also expected to see time. Pass-rusher Jacoby Jones also will miss a while following an injury vs. OU. Former five-star Alfred Collins will be the one to replace him.

UT has scored 32 or more points in five of six games this season and in seven of the last eight games overall. Saturday’s game will be Texas’ third against a ranked opponent this season with the Longhorns holding a 1-1 record in the previous games.

Posted: Thursday, October 14, 2021 11:08, EDT
The game of the day from the Big 12 features surprising unbeaten and 12th ranked Oklahoma State as an NCAAF betting underdog at No. 25 and two-loss Texas on Saturday. If the Horns lose, they can forget about reaching the conference title game. How to Bet Oklahoma State at Texas NCAA Football Odds & TV Info When: Saturday, noon ET Read More

Posted: Wednesday, October 6, 2021 10:41, EDT
The structure of college football basically limits the FBS national championship to members of the Power Five conferences: the ACC, the Big Ten, the Big 12, the Pac-12 and the SEC. This means that members of the other five conferences (the Group of Five) are basically locked out because of a Catch-22. If you can’t schedule other Power Five teams, Read More

Posted: Monday, December 28, 2020 12:03, EST
It’s a matchup of former Big 12 rivals in Tuesday’s second bowl game as Texas of the Big 12 faces Colorado of the Pac-12 in the Alamo Bowl from San Antonio. The No. 20 Longhorns are solid favorites on the NCAAF odds. How to Bet Texas vs. Colorado NCAA Football Odds & TV Info When: Tuesday, 9 PM ET Where: Read More

Posted: Wednesday, November 25, 2020 9:20, EST
Huge game in the Big 12 on Black Friday in the USA as No. 15 Iowa State can punch its ticket to the conference title game with a win at No. 20 Texas, which also still has a path to reach the Big 12 title tilt with a victory. The Horns are short favorites on the NCAAF odds. How to Read More

Posted: Wednesday, May 20, 2020 3:18, EDT
Sam Ehlinger considered leaving Texas for the NFL last season but opted to return for his senior season, and he might be the best returning quarterback in the Big 12. Here are two props available to wager at Mybookie on Ehlinger’s Heisman Trophy chances and Texas’ 2020 college football season – assuming there is one – and an overview. Sam Read More

Posted: Monday, December 30, 2019 8:09, EST
The Utah Utes will look to cap off their fantastic campaign in style when they take on a Texas Longhorns team that has been wildly inconsistent this season despite beginning the season ranked a now, laughable 10th in the preseason rankings. Now,with Utah looking to finish with a win and Texas looking to record consecutive victories, let’s find out which Read More

Posted: Tuesday, November 26, 2019 1:01, EST
A great rivalry game takes place on Friday when the Texas Tech Red Raiders battle the Texas Longhorns. The game takes place at Royal-Memorial Stadium in Austin. Will the Longhorns try to salvage a disappointing season with a win over the Red Raiders? Will Texas Tech end their season with a great cover performance? Check out the college football odds, Read More

Posted: Thursday, November 21, 2019 8:12, EST
The national tile hopes for No. 13 Baylor ended last week in blowing a big lead and losing to Oklahoma, but the Bears can earn a spot in the Big 12 title game – opposite the Sooners – with a win Saturday as a Mybookie NCAAF betting favorite against now-unranked Texas. How to Bet Texas vs Baylor College Football Week Read More

Posted: Wednesday, November 6, 2019 10:02, EST
Both No. 20 Kansas State and Texas are 3-2 in the Big 12, meaning the loser Saturday in Austin probably has no chance to reach the conference title game. The Longhorns are nearly touchdown NCAAF betting favorites at Mybookie. How to Bet Kansas State vs Texas College Football Week 11 Spread & Game Info When: Saturday, 3:30 PM ET Where: Read More